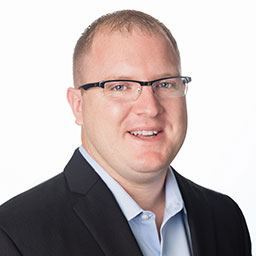 "...do not be afraid to make big changes in your career."

Ryan Collins ’05 has enjoyed a rapid rise in responsibility in the years since he’s graduated. Now living in Austin, Texas with his wife and two children, he’s Chief Technology Officer and Chief Information Officer for Open Lending.

Open Lending, a technology and data company, provides banks and other financial institutions a cloud-based platform to make rapid decisions about auto loans. As part of their product, Open Lending provides insurance protection for those institutions. In addition to the benefits for the lender, Collins says, consumers benefit as well.

“We provide consumers with a correctly priced interest rate rather than be submitted to subprime financial institutions which could be double or triple the rate that Open Lending would charge and the consumer deserves,” Collins says.

It’s pretty clear there’s demand for the product and the technology. Open Lending was named to Austin Business Journal’s Fast 50 list  - the 50 fastest growing companies in Central Texas - for 2013, 2014, 2015, and 2016 in the small business category. Open Lending earned a spot on the 2017 and 2018 list as well - now in the large business category. Collins has been integral to that rise. And so was his time at Edgewood College.

“I was lucky enough to take the Computer and Information Systems/Business major, which in my company has helped me immensely,” Collins says. “Our product is very financially-driven so being able to understand the business side of things is the reason I am in the position I am in. As CIO and CTO, I built the platform and now manage an IT team that maintains and enhances the core platform that was built.”

“Edgewood College on the Business side shaped me into both a technology leader as well as a business leader,” Collins continued. “I currently spend half of my time on managing the technology team and the other half of my time managing the product as the product owner.  I would not have had such a deep and wide expertise if it were not from the foundation that I received in both the Computer and Information Sciences degree and the Business degree.”

In addition to his technical savvy and business sense, his Edgewood College experience also left him with a profound sense of community. Together with his wife, the young Collins family has created the Ryan J. Collins Technology Scholarship at Edgewood College, to support Computing and Information Sciences students. But they haven’t stopped here on campus. They have also launched The Collins Technology Fund, “driven by a single goal; to do our part in making Austin and the world a better place for all by the use of technology.  We strive to build productive relationships and make a positive impact with all of our pursuits.”

Collins’ work has not gone unnoticed: he’s a finalist for the 2019 Austin Under 40, which recognizes Austin residents for leadership in their respective industries, and a strong commitment to serving the community.

His simple advice to today’s students and graduates?

“Internships are invaluable,” he says. “I started as an intern, showed my talent and moved up the ladder quickly.  I would also say do not be afraid to make big changes in your career.  I was outgrowing my original position out of college and as hard as it is to leave both a job that you are used to and an area that you have grown up in, I took the bold action to move to Texas for my current opportunity and have had great success.”
###