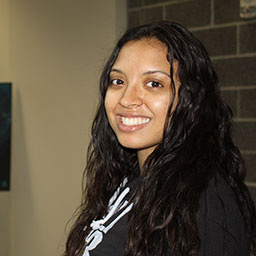 “I think it’s important for everyone to have a voice on campus, so their experience and their goals don’t get lost.”

For Brooklyn Doby, explaining where she goes to college is easy – it’s usually the next question that gets her laughing and shaking her head.

“I almost hate explaining my major, because no one knows, and then you have to explain it to every person you encounter.”

Despite that, we ask (please) that she try at least one more time.

“I like to explain Art Therapy as helping people cope visually versus verbally,” she says. “These can be people who have dealt with trauma, or people looking for outlets to relax, or for people who don’t express themselves very well. It’s a way to show your story. The images you create can provoke a conversation. I guess there’s not really a clear answer – maybe it’s a way to allow your art to speak for you.”

“I came to Edgewood College specifically for the Art Therapy program,” she adds.

The Madison native and senior Art Therapy major is a leader on campus, a student who extends the theory of art as a communication vehicle into the campus community, and beyond.

Brooklyn has just finished up her term as president of the Black Student Union, an organization she’s been involved with since her freshman year. She’s been involved with the Multicultural Student Advisory Council, a group that assists with the coordination of the annual all-campus Diversity Forum (that's Brooklyn below, speaking at this year's Forum).

“I want to be someone that others feel they can come to. I want to make sure that I’m known as a friendly face to someone that can be helpful and be an advocate for them,” she says.

And she isn’t just studying how to do that. During her sophomore year, she hosted a ‘paint night’ on campus, specifically inviting women of color – students, faculty, and staff. Her art has been part of the Student Exhibition in the Edgewood College Gallery each spring, and she has a mural she created for the Teen Center at Madison’s Elver Park.

“My artwork pertains to a lot of positive images of people of color, so my goal with Art Therapy is to uplift specifically the Black community,” she says. “My goal is to work with women of color, to help them feel more confident in themselves through art, or to deal with their life situations through art, because a lot of times there’s not many positive images in the media of them.”

An advanced degree is in her future after graduating, she says, and she hopes one day to have her own studio and gallery. But for now she’s focused on making sure all her fellow students feel heard – through art or otherwise – and all make the most of the opportunity education presents.

“It’s important to make people feel like they belong,” she says, “and to make them feel like they accomplished something throughout their college years.”