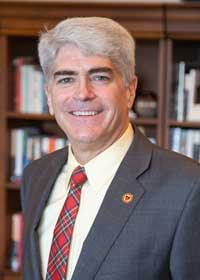 Madison, Wis. (April 9, 2020) – The Board of Trustees of Edgewood College announced today that Dr. Andrew Manion will serve as the 9th President of Edgewood College.  Dr. Manion most recently served as President of Marian University in Fond du Lac, Wis. He will replace Mary Ellen Gevelinger, O.P., Ed. D, who has served in the role of Interim President since September 1, 2019.

“Amy and I are thrilled to be joining the Edgewood College community and are grateful for the opportunity to reconnect with the Sinsinawa Dominican sisters,” Dr. Manion said. “I look forward to working with the dedicated and talented faculty, staff, and trustees on behalf of our hard-working students. As Edgewood College approaches the 100th anniversary of our founding, we have the opportunity to create our own future. The Edgewood College community has done a lot in recent years to prepare for the next chapter and I am excited to become part of this important work.”

“Dr. Manion will serve this community, our students, and all who love Edgewood College with energy, passion, expertise, and heart,” President Gevelinger said. “His career thus far – both in and out of the classroom – exemplifies a life of study, reflection, and action. His is a mission-driven career, and we are excited for his leadership moving us into a very bright future.”

“Dr. Manion is student-centric and a forward looking and inclusive leader who possesses a deep commitment to Edgewood College’s mission and to its community of learners who seek a more just and compassionate world,” Lucy Keane ’84, Chair of the Board of Trustees, said. “When we began this search, I called for the process to be inclusive, intentional and strategic. Our Presidential Search Committee was presented with a challenging task, and they delivered the ideal result.”

“We had so many qualified candidates from across the country come forward with interest in this position; being President of Edgewood College is a great job,” Mary Schmoeger, Chair of the Presidential Search Committee and member of the Board of Trustees, said.  “Our team was dedicated and committed to a process to find the best person to lead Edgewood College. Andy separated and distinguished himself from other candidates in many ways especially his deep understanding of issues facing higher education, a bold vision for the future and the executive experience to manage the intersection of sustaining financial health and innovation.”

Dr. Manion will begin serving in a consulting role to President Gevelinger in May 2020. He will officially begin his term as the 9th President of Edgewood College on June 1, 2020.

Dr. Manion has served as President of Marian University since 2016. Under his leadership, the university successfully completed a $12 million capital campaign, enjoyed significant growth in enrollment, expanded academic and athletics facilities, and made significant strides in the areas of diversity, inclusion, and social justice.

Prior to his work as President at Marian University, Dr. Manion served for nearly 20 years in multiple academic and administrative roles at Aurora University, including Dean of the College of Arts and Sciences, Provost, and Executive Vice President.

Dr. Manion served on the faculty of Saint Mary’s University of Minnesota from 1991 to 1998, first as Associate Professor in the Department of Psychology, then as Director of the Institute of Interdisciplinary Studies, and as Associate Dean of Humanities.

Dr. Manion holds a Ph.D. in Experimental Psychology and a Master of Arts in Psychology from Adelphi University in Long Island, New York. He is a graduate of St. Norbert College in DePere, Wis. where he majored in Psychology.

He currently serves as President of the Northern Athletics Collegiate Conference (NACC), of which Edgewood College is a member.

A native of Providence, Rhode Island, Dr. Manion is married to his wife Amy, and both are proud parents of Jack, Kevin, and Clare. The attention their (now) grown children received has been refocused on their newer companions Guinness and Stella, who are sibling canines.