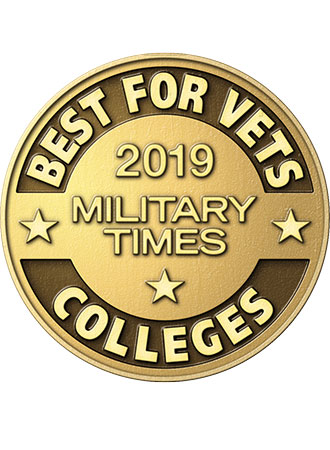 “Military Times’ Best for Vets designation is trusted throughout the veteran community as the mark of excellence for schools and other organizations that work with veterans, service members and military families,” George Altman, the Military Times editor in charge of the rankings, said. “It can’t be bought with advertising dollars, only earned through a record of steadfast service and dedication to those who have served. Fewer than half of the roughly 500 colleges and universities that competed for the recognition earned the right to call themselves Best for Vets in 2019. Their efforts should be commended.”

Edgewood College is one of only four colleges or universities in Wisconsin to be named to the list, and is the only private institution to be so recognized.

Now in its ninth year, the rankings are based on the results of Military Times’ annual survey – the most comprehensive school-by-school assessment of veteran and military student services and rates of academic achievement – as well as a detailed review of public data collected by federal agencies.

As is true for all Military Times rankings, Best for Vets: Colleges is an editorially independent, objective and rigorous news project. This feature evaluates the many factors that help make colleges and universities a good fit for service members, military veterans and their families. About 500 colleges took part in this year’s survey.

About Military Times
The Military Times digital platforms and newsweeklies are the trusted source for independent news and information for service members and their families. The military community relies on Air Force Times, Army Times, Marine Corps Times, Navy Times and Rebootcamp for reporting on everything important to their lives, including: pay, benefits, finance, education, health care, recreational resources, retirement, promotions, product reviews, and entertainment.
###