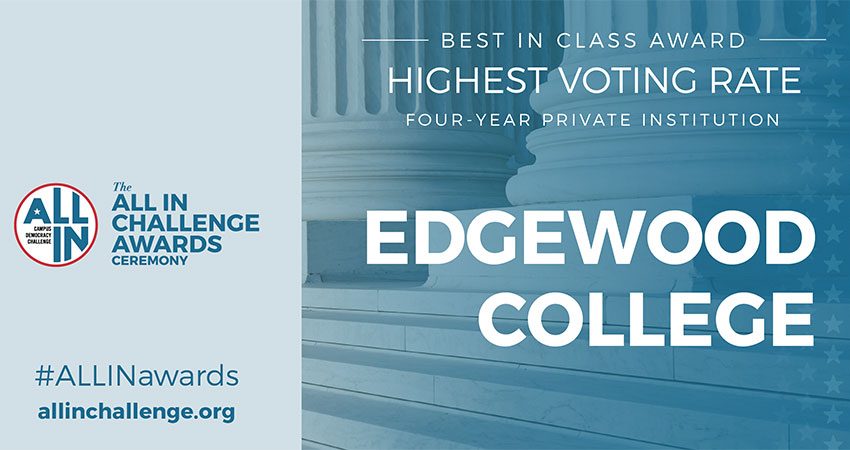 More than 30 awards were announced at the event that took place at the Knight Conference Center at the Newseum in Washington, D.C.

“We are honored that our students have been recognized for their choice to be civically engaged through our democratic process,” Dr. Kris Mickelson, Dean of the School of Integrative Studies said. “As an institution, we are committed to an education where engaged learning is central to our students’ experience, and civic engagement is one of the hallmarks of that commitment.”

Maribeth Witzel-Behl, Madison’s City Clerk, also played a crucial role in the most recent election by providing an early voting location that students, faculty, staff and voters from the surrounding neighborhoods were able to use, Mickelson said.

Student participation in elections has increased in the past few years nationwide. A recent report, “Democracy Counts: A Report on U.S. College and University Student Voting” from the National Study of Learning, Voting, and Engagement, an initiative of Tufts University’s Institute for Democracy in Higher Education, shows that between the 2012 presidential election, and the 2016 presidential election, student voting went from 45.1 percent of eligible voters in 2012 to 48.3 percent in 2016 – a 7 percent improvement. Data for Edgewood College shows student voting at 65.7 percent in 2016.

“I am proud to honor Edgewood College with an ALL IN Challenge award in recognition of their dedication, hard work, and achievement,” said Zaneeta E. Daver, director of the ALL IN Campus Democracy Challenge. “Edgewood College is not only ensuring that a more representative population participates in our nation’s democracy, but is educating students to be civic-minded. They are an example to be emulated.”

The All IN Campus Democracy Challenge is a national awards program. The Challenge encourages higher education institutions to help students form the habits of active and informed citizenship, and make democratic participation a core value on their campus. By joining the Challenge, campuses commit to:

Nearly 300 campuses, enrolling more than 4 million students, have joined the Challenge since its launch in summer 2016.

About Edgewood College
Located in Madison, Wis., Edgewood College is a liberal arts Catholic college in the Dominican tradition. We serve approximately 3,000 undergraduate and graduate students at our Monroe Street and Deming Way campuses, and online. The College offers more than 40 academic and professional programs, including master’s degrees in business, education, and nursing, and doctoral degrees in educational leadership and nursing practice. For more information about Edgewood College, please visit www.edgewood.edu, or call Ed Taylor in Marketing & Strategic Communications at 608-663-2333.
###