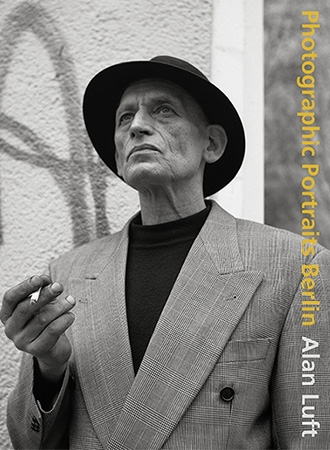 Since 1985, Luft (seen above in Berlin) has been visiting Berlin to document the city and its inhabitants. He has created over fifteen thousand, primarily medium format negatives during the course of the project. Luft photographs people in their homes, workplaces, and on the streets of Berlin. He meets his subjects from word-of-mouth connections but also likes to encounter individuals through chance by walking the city.

“My work in Berlin has helped me understand and redefine my own identity,” Luft said. “What inspires me is the transformation of the city from its tragic past. In many ways the wild spirit and democratic visions of 1920s Weimar culture have come true. Berlin today is a diverse mix of people, and I think it represents what the future will look like elsewhere. History is about individuals adapting, changing, and moving from one place to another. My Berlin photographs embrace that reality and offer a unique record of the city in the post-Wall period.”

Professor Luft is the great-grandson of German immigrants who settled in the rural township of Fredonia, Wisconsin, a region populated by German-Americans. His family farmed in that area for more than 150 years. German was spoken at home, a linguistic practice that ended with the death of his paternal grandmother in 1979.

Luft holds an M.F.A from UW-Madison, and currently serves as Chair of the Art Department at Edgewood College. He said he hopes his latest accomplishment will serve as an inspiration to students both today, and in the future.

“As an educator I feel strongly that we must inspire students to ‘make things happen’ both professionally and personally,” Luft said. “My own individual accomplishments have been included in my classes here at the College, as an example of this process.  I have used my Berlin Portfolio as a model for intellectual and technical inquiry in all of my courses.”

(photo credit for above: Joachim Rissman)
###