The exhibition features the work of two Dominican Sisters of Sinsinawa, Catharine Wall, O.P., and Isabel Rafferty, O.P. Sr. Catharine Wall’s (1867–1938) charcoal portraits from the turn of the 20th century reflect her training in Europe between 1895 and 1910, while Rafferty’s contemporary computer animations utilize images from the 21st century Saint John’s Bible. The work of both artists reflects not only the Dominican mission, but a commitment to making work relevant to their time. In this 800th anniversary year of the Order of Preachers, the opportunity to showcase the works of both artists side by side is unique and powerful. 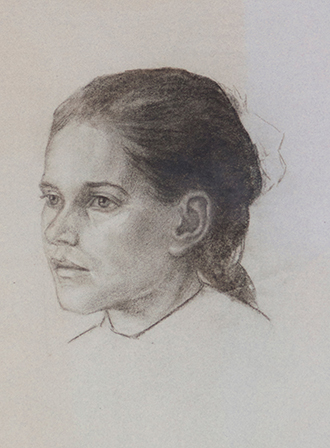 Sr. Catherine Wall is remembered as one of the finest artists in the Dominican Sisters of Sinsinawa community. She studied in Florence, Rome and Munich, and was considered a master copyist of Renaissance works. The charcoal and graphite portraits in this exhibition were most likely done at the Academy of Fine Arts in Munich, Germany, and are dated between 1895 and 1905.

Sr. Isabel Rafferty, currently on the faculty in the Art Department at Edgewood College, explores themes of creation, incarnation and transformation inspired by the Saint John’s Bible. On Sunday, November 22, 2015, her projected animations were accompanied by live performances by four   Music Department ensembles in a collaborative effort entitled Illuminated Harmony. For this exhibition, the Illuminated Harmony animations were reset to the concert recording of the live event and are displayed on a screen. (The College created a 'teaser' for the event, which is available online.) The Gospels & Acts volume of the Saint John’s Bible Heritage Edition may also be viewed in the gallery during the exhibition.