Studying abroad wasn’t always part of Ashley Ligman’s college plans.  “Applying…was sort of an impulsive decision, but it led to one of the best experiences of my life,” she says. In the spring of 2015, Ashley, a senior from Stevens Point, Wis., spent four months studying in Australia.  Initially she wasn’t sure about spending a semester away from campus, but was sold once she discovered that she could still graduate on schedule.

“In my college experience so far, I’ve found that the city of Madison and Edgewood College have been terrific fits for me, so I tried to look for a school (in Australia) that might have some similarities.” 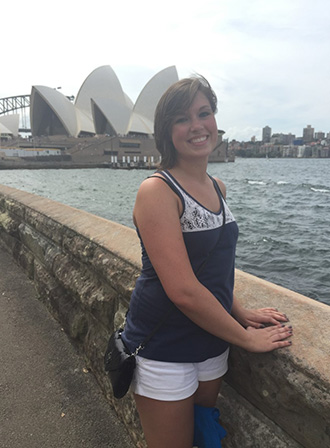 She settled on the University of Canberra, halfway between Sydney and Melbourne.

“Although the University had about five times the number of students as Edgewood College, their website talked a lot about taking a hands-on approach to learning, which is something I love about our learning style here.”

While at the University of Canberra, Ashley focused on knocking out some of her general requirement classes, including chemistry and literature.  On the weekends, she and other international students explored the region, visiting Sydney, Melbourne, Cairns and the Blue Mountains.  She went scuba diving near the Great Barrier Reef, trekked through the oldest rainforest in the world, and saw countless waterfalls.  She also spent ten days on the south island of New Zealand, hiking to glaciers, caves and more.

“The whole experience went by so fast, but I enjoyed every single second of it…I think going to the other side of the world and not knowing anyone there made me much more independent and self-confident.”

Now back in Madison, Ashley continues to work toward her degree in Psychology and Communication Studies while working in the Technology Assistance Center.  Additionally, she is working with the Center for Global Education to encourage others to discover similar experiences.

“I never thought I would be able to afford studying abroad, but the programs Edgewood College offers made it possible.  Now I’m just trying to save up and figure out where I want to go next!”