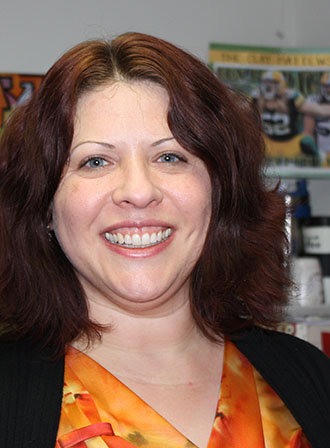 Brenda del Moral is not your average science professor. Her ‘hybrid’ version of Anatomy and Physiology is far from what you might expect. Along with the class having a very different structure, Professor del Moral believes laughter is a tool for learning.

“Humor is not distracting,” she says. “It creates an inclusive environment.”

Edgewood College is the perfect environment for this untraditional class, she says. “I’m allowed to be myself in the classroom.”

Anatomy and Physiology 1 and 2 are required courses for anyone majoring in the health sciences. This ‘hybrid’ version takes place partly online and partly in class. Each week features a two-hour lab and a one-hour discussion.

“The discussion emphasizes and integrates things that the students are doing online before they come to class,” she says. “We take the information I would give them in lecture, and I put it online. That doesn’t actually mean that I lecture online.”

Technology and intense course content? Yes. But there’s also del Moral just being herself; one of the best parts of teaching, she says.

“I love the Green Bay Packers, and I watch all of the games. I am pretty sure I could teach Anatomy and Physiology using football examples.” Case in point: Clay Matthews.

Some of her dialed-in students are big fans, too. “One of my students tweeted ‘My Anatomy and Physiology professor uses @ClayMatthews52 as an example for fight or flight,’ so Clay Matthews retweeted his tweet,” she says, laughing.

And her approach works, by the way. In 2014 she received the Underkofler Excellence in Undergraduate Teaching Award, the College’s highest honor for teaching.