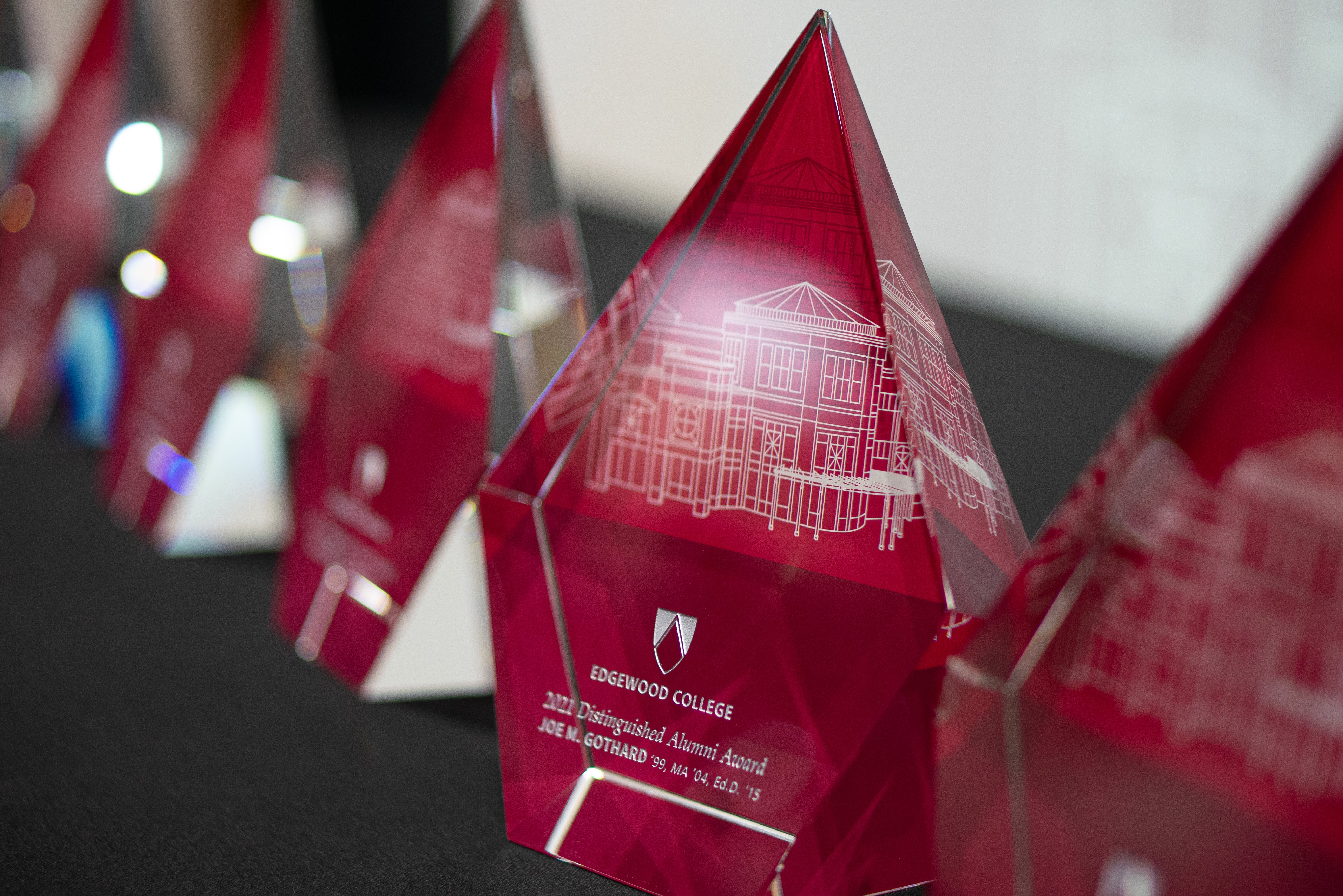 Each fall, Edgewood College partners with the Alumni Board and the Office for Institutional Advancement to recognize extraordinary alumni with three awards:
Distinguished Alumni Award—acknowledges the accomplishments of an alum who has achieved excellence in their professional career and has demonstrated a commitment of ethical leadership, service, and search for truth.
Dominican Mission Award—recognizes an alum who has shown a commitment to social justice or a history of extraordinary volunteer service in the community, country, or the world.

Promise Award—recognizes an alum, 40 years of age or younger, who is an emerging leader and has achieved a high level of success through professional accomplishments and service to their alma mater or community.

Betty Banks was born and raised in Madison, Wisconsin.  She graduated from Old Central High School and received a Bachelor of Arts degree from Edgewood College. Betty is retired from a career of supporting families that began when she became an advocate for her son, Alan.  Her work as the Director of Family Enhancement’s Early Childhood Family Resource Center was fulfilling and rewarding as she provided opportunities for parents to strengthen their parenting. After retirement, she continued her volunteer work with her own non-profit, Today Not Tomorrow, Inc. that was co-founded with the late Gaddi Ben Dan.  Together, for 39-years, they blended their skills and abilities and went on to publish newspapers, produce concerts, create Club TNT television show, produce two radio shows, honor community treasures (Water Bearer Awards), and both became mentors to many in the younger generation.

Presently, Betty is a co-founder and advisor to The Harambee Birth and Family Center, a collaboration of four organizations who have come together to support and strengthen families and address the maternal child health disparities that plague our community.

Jeff Pothof is the Chief Quality Officer for UWHealth.  After completing his undergraduate degree at Edgewood College, Jeff obtained his medical degree from the University of Wisconsin and residency training in emergency medicine at the University of Michigan.  While at Michigan he completed a graduate medical education scholars program in healthcare administration.

Jeff’s passion in healthcare is in patient safety and the delivery of high-quality care.  He currently sits on the board of the Wisconsin chapter of the American College of Emergency Physicians, and has held numerous other leadership roles over his career. The American College of Emergency Physicians recognized his contributions in 2022 with the Distinguished Service Award.

More recently Jeff has been a key leader in UWHealth’s preparation, planning, and response to the COVID-19 pandemic.  He served as Medical Branch Officer in UWHealth’s incident command center making countless impactful decisions to ensure the delivery of high-quality medical care while preserving the safety of both patients and staff.

Chris started her nursing career as a Labor and Delivery RN at St. Mary's Hospital. She has also worked in postpartum, nursery, on a few different Med/Surg units as an Infection Control nurse, and as a Employee Health Coordinator. She briefly taught at both Southwest Wisconsin Technical College in Fennimore, Wisconsin and for the School of Nursing at the University of Wisconsin-Madison. Chris has volunteered at the Community Connections Free Clinic in Dodgeville, WI for over 10 years. Chris is blessed to be married to an amazing man (Paul) of 35 years.  She has two sons (Kyle and Ryan), a daughter-in-law (Kayla) and a very 2-year-old grandson (Brooks) and a new granddaughter (Reagan) - all of who are dearly loved.

Dr. Corinda Rainey-Moore presently serves as the Community Engagement Manager at UnityPoint Health Meriter.  As a mental health professional and advocate for over 25 years, Corinda was the first and only African-American to lead two community support programs for adults with severe and persistent mental health issues in Dane County. Through her leadership, her programs utilized Peer Support efforts to help empower individuals suffering from mental illness. Corinda was also the first and only African-American to serve as Chair of the National Alliance on Mental Illness Dane County, Safe Communities Dane County, and Leadership Wisconsin.

Corinda continues to volunteer for numerous organizations. A mentor, leader, and a voice for the underserved, Corinda’s contributions have been recognized by communities and organizations she has served including Madison 365 Most Influential African-Americans, Brava Magazine Women to Watch, and numerous others. Corinda has an Ed.D. in Educational Leadership from Edgewood College, two Master degrees in Community Mental Health and Communications. She is married to Bobby Moore, and they have two children, Kenyatta and Kionna and 8 grandchildren.

In her current role as Director of Multicultural Business Strategy at CUNA Mutual Group, Opal is dedicated to leading and advancing the efforts of the Multicultural Center of Expertise (MCOE).  The MCOE exists to help CUNA Mutual Group understand multicultural consumers, identify business opportunities, develop action plans, and execute those plans to better serve underserved consumers and generate substantial business growth.  In 2020 she was named as one of Wisconsin’s 51 most influential Black Leaders by Madison365 Media. Opal received her bachelor’s in Psychology from the University of Wisconsin-Parkside and a Master of Science in Organizational Development from Edgewood College.

Opal is also a spoken word artist, emcee, and author.  She has been performing poetry nationally since 2016, and released a full-length studio spoken word album called "My Name Is Opal" in 2019. She released a poetry book by the same name in 2022, My Name is Opal the book made Amazon bestseller lists shortly after being released. Opal is also a co-host of Black Currency, a financial literacy podcast available on all platforms. She serves on the board of directors for UCAN (Urban Community Arts Network), the Midwest chapter for the African American Credit Union Coalition and on the advisory council for the Melanin Project.

Ami Myrland serves as the Senior Vice President and Chief Financial Officer of Capitol Bank in Madison, Wisconsin.  Ami is responsible for the IT, Human Resources and Finance areas of the Bank.  Prior to joining Capitol Bank, Ami held a variety of roles from Auditor to Controller to CFO and had experience in a variety of projects and initiatives.  She holds a Bachelor of Science degree in Accounting and Finance from Edgewood College in Madison.  She is a member of the Council for CATCH (Community Around the Children’s Hospital), the Vice Chair for the Leukemia & Lymphoma Society (LLS) Board, a member of the Executive Committee for Madison’s Light the Night Walk for LLS, and serves on the Board for the Wisconsin Bankers Foundation.  In 2022, Ami received the ICBA (Independent Community Bankers of America) 40 Under 40 award.  She was also recognized as one of InBusiness Magazine’s 40 Under 40 in Dane County in 2019 and was an Athena Young Professional Award Nominee in 2020.