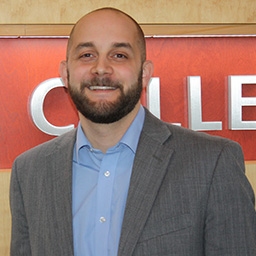 “When you tour the school, you quickly feel a sense of community and feel personally connected with professors after sitting in on the classes. I knew it was the learning environment I wanted to be in.”

“I’m a believer in ‘If it’s not broken, don’t fix it,’ “ Nick Lombardino ‘10, MBA ‘12, said. It’s this mindset that’s made him a lifelong resident of Madison, Wisconsin, and why he always seems to come back to Edgewood College.

Director of Consultant Advocacy & Development at Farwell, Lombardino has also been using his expertise as the President of CultureCon. He and CultureCon founder Zach Blumenfeld had the idea to create a large, culture-centric conference in Madison two years ago, with the inaugural conference coming to fruition this past summer and hosting 400 attendees.

“It’s a very gooey and nebulous thing, with topics across the board. Diversity, equality, inclusion, corporate social responsibility, mindfulness in the workplace,” Lombardino said. “We want to continue to celebrate that. Based on the energy and the validation around people wanting to experience all these different cultural aspects that coincide with high-performance organizations.”

With the success of the first conference under their belt, the CultureCon team created MiniCultureCons, where condensed versions of the larger conference are hosted in cities across the country.

“The cool thing with Edgewood College... each year, they take a different Dominican value, and this is the Year of Compassion. All our speakers are going to give talks that relate to compassion and empathy in the workplace,” Lombardino said. “This one is particularly special.”

Lombardino learned all about these Dominican values during his time as an undergraduate student here.

“When you tour the school, you quickly feel a sense of community and feel personally connected with professors after sitting in on the classes. I knew it was the learning environment I wanted to be in,” Lombardino, who graduated with his undergraduate degree in Business, said.

A four-year member of the Men’s Soccer team, Lombardino says he’s fortunate that he was hired as an assistant soccer coach after graduation. This gave him the opportunity to go straight into the MBA program. There, he learned not only from faculty, but from his classmates who had real-world experience and points of reference.

“Edgewood College has been an integral part of my personal and professional growth. Not just from my education, but having met my wife there, working as a coach, now guest lecturing through Social Science,” Lombardino said. He’s also a member of the School of Business advisory board and a member of the alumni board. “I’m still serving Edgewood College.”

MiniCultureCon is another great way he’s found to collaborate with the College.

“Advice I learned late in life is to isolate what your values are as early as you can and find something, whether a hobby or career, and really try to deeply explore it,” Lombardino said. “With CultureCon, it’s a sense of community. You're surrounded by people who get fulfilment from bettering themselves and helping others. Within that sense of community, you’re surrounding yourself with individuals who are compassionate, kind, and empathetic.”