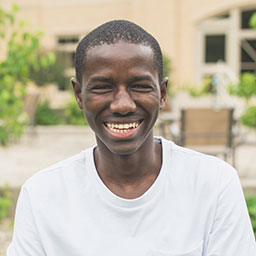 “The answer lies within you. Know what you want, be bold, and pursue it..."

More than 400 undergraduate and graduate candidates for degrees celebrated the start of their next chapter at Commencement, held May 19, 2019, at the Veterans Memorial Coliseum at the Alliant Energy Center.

A highlight of the day, and a great example of a (now) graduate who didn’t wait to begin connecting learning, beliefs and action is Commencement speaker Mamadou Jawo, ’19.

A native of The Gambia, Africa, his family moved to Madison in his junior year of high school. While studying at Edgewood College, he worked at Briarpatch Youth Services. That agency offers a broad array of services to runaway, homeless, and at-risk youth. Jawo observed the importance of the role judges play in determining the treatment of juvenile offenders. His capstone senior project for his Criminal Justice degree included personal interviews with the four Dane County Circuit Judges who handle juvenile cases, to shed light on what factors might influence their decision-making.

“From an early age being exposed to the criminal justice system, I knew I wanted a career that enables me to help serve indigent and vulnerable individuals entangled in the legal system,” he told the audience. “This was made more apparent since my arrival in

the United States and learning about the mass incarceration of people and the effects it has on many communities, especially the Black community. Through various work and volunteer experiences while at Edgewood College, I have built upon my knowledge of the judicial system and ways I can positively make an impact.”

An active campus leader, he has been deeply engaged in the life of Edgewood College and the larger Madison community. He competed for the Eagles Men’s Soccer team for all of his four years (No. 7 in photo, with fellow senior teammates, fall 2018.) He also volunteered as a Court-Appointed Special Advocate for children involved in the court system.

Accepted into multiple prestigious law programs, beginning this fall he will attend the School of Law at UW-Madison.

“How are you going to make sure you have a role in building a just and compassionate world,” he asked his fellow graduates. “The answer lies within you. Know what you want, be bold, and pursue it – no matter what obstacles you’re faced with. I challenge us all to take the initiative to advocate for ourselves and our community to make the world a better place.”