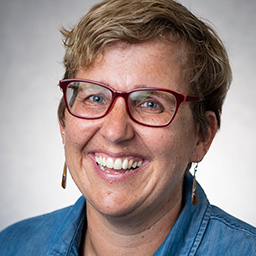 “OFS is very similar to work at Edgewood College; working with barriers. The number one issue is academic preparedness. Many are not prepared for the rigors and content of college expectations.”

As a self-described “late bloomer,” Karen Ball graduated from Madison West High School by just squeaking by. Without much in the way of direction but an interest in community service, Ball joined Americorps, where she worked with the South Carolina National Service Corp. After one year she returned to Madison and Operation Fresh Start. As a participant for OFS, Ball did not have the same barriers as others but was interested in exploring tutoring, education and mentoring. “That set me on the path to transformational education in my career and personal life,” Ball said. She also helped build affordable housing. “The opportunities to build strong relationships on the housing site was like nothing I have ever experienced.”

Ball obtained a bachelor’s degree in math education from Edgewood College after being inspired by one of her college professors. Pursuing math education with an open mind, Ball never saw herself as a traditional math teacher. With a mantra of “math solves problems,” Ball tackles most challenges as a math problem: problems are complex; look at a problem from different angles; solutions are not easy or fast. “I got my degree in education just to return to OFS,” Ball said. And when the rare teaching opportunity opened at OFS after graduation, Ball jumped at the chance.

“My mentors at OFS shaped and inspired me more than they will ever know,” Ball said. Those mentors include Connie Ferris Bailey, George Riggin, Jim Sanders and Tim Perry. She carried those experiences of high expectations and building relationships in her work at OFS and beyond.  Ball sees the age of participants at OFS, 16-24 years old, as a sweet spot to work with students. “It was awesome to come full circle and be in the role to facilitate learning and an honor to provide those opportunities,” Ball said.

Continuing her own educational path, Ball earned a master’s degree from UW-Madison in Administration Leadership. Stepping into the role of education director of OFS, Ball developed and administered programs to increase academic achievement and employment readiness for low-income, at-risk young adults. One of her accomplishments as education director was receiving a Bill and Melinda Gates grant to help students with a GED transition into college.

After six years at OFS, Ball was hired as the assistant director of math and tutoring, helping incoming freshman students come up to speed for college course work. At Edgewood College, Ball finds herself on the other side of the college bridge. “OFS is very similar to work at Edgewood College; working with barriers. The number one issue is academic preparedness. Many are not prepared for the rigors and content of college expectations,” Ball said. She currently holds the position of director of academic success at Edgewood College, creating curriculum, training instructors, evaluating and supporting developmental math education. Ball thrives in the small college atmosphere, where she finds the encouragement to be creative.

Ball’s Americorps experience has shaped the community services she supports today. “I really believe in mentorship,” Ball explained.  First as a Girl Scout leader, then a co-founder of Builder Boys, fostering community and confidence building in five to six-year-old boys. Ball and Jeremy Wineberg wanted to let boys get their hands dirty and have an opportunity to try new things. Ball also worked with transitional high school students earning their CNA and move into health care careers.

As an educator and a parent, Ball had for many years expressed an interest in running for the Madison School Board. Vying for school board Seat 6 earlier this year, Ball made that idea real. She emphasized the opportunity gap, referendum, new superintendent and preserving staff with direct contact with students. Ball did not get the needed votes and admitted to being very green to politics. But she says she learned so much and gave voice to issues she feels strongly about. “I believe in student potential,” Ball said.

Whether an OFS participant, teacher, administrator, volunteer or candidate, Ball prefers to describe herself as “someone who inspires people to do things they never thought they could do,” giving credit to the many people who guide her on that lifelong mission.