“I look forward to engaging with student-athletes and coaches in this new role. I would like to thank President Manion for extending this incredible opportunity to lead the Eagles Athletic programs,” Saltzberry said. “I'm grateful for all the opportunities while serving under Al Brisack’ s leadership.” 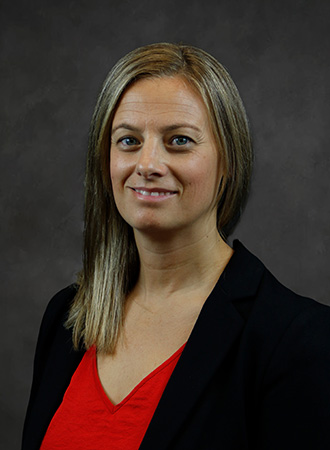 Saltzberry brings 16 years of collegiate athletics experience. Saltzberry returned to her alma mater in 2006 when she joined the staff as the Athletic Business Manager and was then promoted to Assistant Director of Athletics in 2011. In the fall of 2008, Saltzberry was named Senior Woman Administrator. Most recently, she was promoted to Associate Director of Athletics and served as the Student-Athlete Advisory Committee faculty leader.

As Associate Director of Athletics, Saltzberry was responsible for oversight of assigned sport teams, supervising the athletic department financials, assisting in the development of the College’s strategic plan, and advocating NCAA rules and guidelines throughout the department. With the addition of three new programs (Women’s & Men’s Lacrosse and Men’s Volleyball) in 2019, Saltzberry was instrumental in guiding these programs toward growth and success at the College. She is the primary organizer of the Eagle Golf Outing since 2007 and has raised significant funds in support of Eagles Athletics in her tenure.

“This is an exciting opportunity for the Eagle Athletics Department and Edgewood College,” said Al Brisack. “For more than 15 years, Suann has been preparing for this position and the opportunity to direct the College’s athletics vision. She has consistently demonstrated her short-and long-term organizational skills and her ability to build consensus. Her competitive nature and love for our student-athletes are without question. I am happy for Suann but, more excited for our future student-athletes. I look forward to continuing our work together in a new capacity.”

Saltzberry was a prolific three-sport athlete and a 12-time varsity letter winner in her career at Edgewood College from 2000-04. She played volleyball, basketball, and softball. In volleyball, Saltzberry collected 1,897 career digs. Her senior year she established a new single season school record with 794 digs. She was a member of the 2004 softball team which won the Lake Michigan Conference Tournament and advanced to the NCAA Division III Championships.

“I want to thank Al Brisack for the selfless dedication to the NACC, not just during my tenure but for the whole of his career at Edgewood College,” said Jeff Ligney, Northern Athletics Collegiate Conference Commissioner. “Suann Saltzberry is one of the top young administrators that I have worked with. I am excited to add Suann’s voice to our Directors of Athletics group as the NACC embarks on a new strategic plan and a new era.”

With her appointment, Saltzberry becomes the first female director of athletics overseeing all intercollegiate athletics in the Madison area. “I am eager to further engage and enhance the student-athlete experience, as Athletics serves as an important complement to the educational mission of the college,” said Saltzberry.

Saltzberry takes over for Al Brisack, who led the department since 2006. Brisack will continue on as Head Baseball Coach and move into a new position managing special projects and fundraising at Edgewood College.

In her new role, Saltzberry will be responsible for the oversight of 20 NCAA Division III intercollegiate athletic programs and, as a result, the leadership of administrators, coaches, and approximately 350 student-athletes.
###