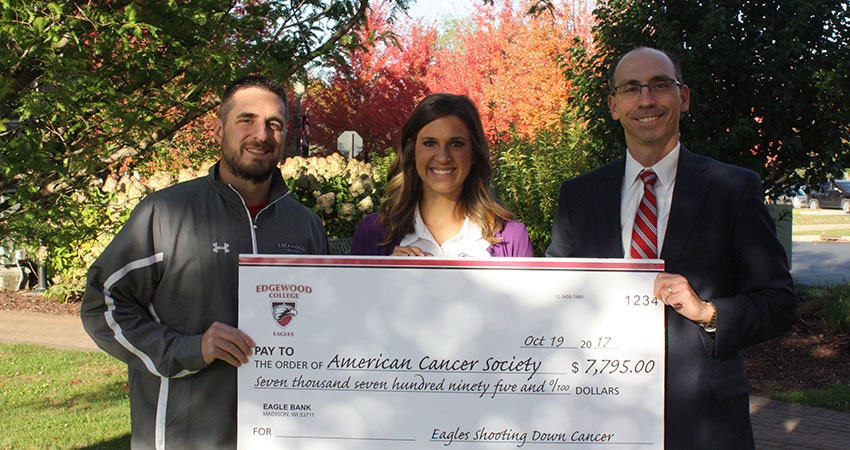 MADISON, Wis. (October 19, 2017) - Under the banner of #UniteToFight, Edgewood College's newest fundraiser "Eagles Shooting Down Cancer" exceeded expectations in its first year of existence. The Edgewood community came together to raise $7,795 for the benefit of the American Cancer Society's Coaches vs. Cancer Wisconsin program from October 10-14, with more donations still arriving.

"We are so pleased with the support of our Edgewood community," said Edgewood College head men's basketball coach Justin Meyer. "Everyone's life has been touched by cancer in some way, so to see all these people that want to contribute and make a difference in the lives of others was truly inspiring. We would like to thank everyone who participated or donated."

Over the course of five days, students, faculty, staff, parents and alumni from Edgewood Campus School and Edgewood College made 495 free throws and 41 half-court shots to earn a total bonus of $6,590. When added to the $1 donation per shot and the matching pledge, the Eagles raised $7,795 for the benefit of the American Cancer Society's Coaches vs. Cancer Wisconsin program. The inspiration behind Eagles Shooting Down Cancer stems from former University of Wisconsin men's basketball coach Bo Ryan and his wife Kelly who began this initiative six years ago.

"We are beyond grateful for Coach Meyer, Edgewood College Athletics, President Flanagan and all those who participated in this event," said Marieanna Wild, Senior Development Manager at the American Cancer Society. "It is incredible to see a community come together to raise awareness and give back.