Madison, Wis. (March 11, 2016) – President Emeritus Dan Carey will be recognized for his outstanding service in two separate awards, given by two esteemed organizations. 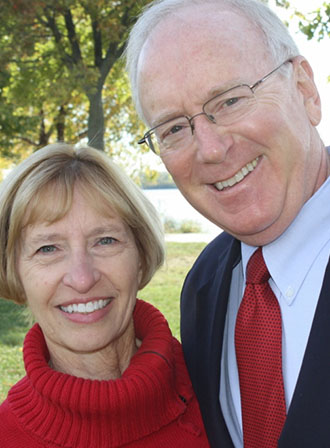 Dr. Carey, who served as President of Edgewood College from 2004-2014, will receive the Lumen Vitae (Light of Life) award, presented by the monks of St. Benedict’s Abbey in Atchison, Kan. The Abbey is the sponsoring community of Benedictine College in Atchison, Kansas. The award will be presented on April 16, 2016 at a Mass and dinner at the Sheraton Crown Center in Kansas City. Dr. Carey served as President of Benedictine College From 1995-2004.

“The monks of St. Benedict’s Abbey are excited to honor Benedictine College past President Dr. Dan Carey and his wife Terri with the Lumen Vitae,” Abbot James Albers, OSB, said. “Their exemplary service and leadership were instrumental in the growth of the college; they truly exemplify our Benedictine values of prayer and work.”

“Dan and Terri have made a positive difference in the lives of countless students and leaders in higher education,” said Dr. Scott Flanagan, President of Edgewood College. “This recognition is certainly well-deserved!”